WOW. I had been looking forward to this event ever since everyone was signing up for it back in Hawaii. I would have done it there, but you know, the navy moved us and didn’t check with my racing schedule beforehand! Ha!

I did this race with my sister (with whom I have been working out with since moving back) and I have to say, it was AWESOME!! It was hot, muddy, filthy dirty fun and I can’t wait to do it again next year! Official race pictures aren’t up yet, but here are the few I took:

This was on the bus ride from the parking area to the festival area….notice how squeaky clean we are!? Bwahhahahaha! That changed fast!

I found it funny that my “warrior cry” came out more like a Pirate’s “Arrrgh Matey!” I think I may be watching too much of Jake and the Neverland Pirates with my son! 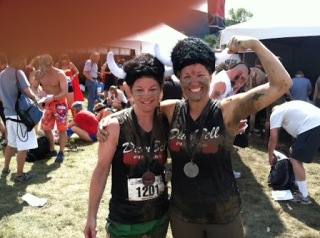 And here are me, my sister, and my brother in law’s thumb! This was post shower! It was insane. The “shower”, if you could call it that, was a guy with a fire hose spraying us muddy warriors off in a cattle pen. It was ridiculous. And not effective as evidenced by the slop still hanging on my arm. I have to say, it was SO much fun, but my shower may never be the same!

Katie enjoying her turkey leg!! Luckily she shared with us! It was SO tasty!!! There is just something about gnawing on meat while wearing a viking helmet – it’s carnal and way fun!

And Sarah playing peek with the camera!
The girls were both such troopers! It was a HOT day and lots of waiting and lines. SO much fun and I can’t wait until next year.
Oh, that reminds me. I won’t have to wait until next year. I signed up for a Tough Mudder in September.
Oh. My. Check out their INSANE website! The video gives you an idea of what I’m in for….
http://toughmudder.com/
I think this mud stuff just might be addicting.