When I first started running, I was fit into a traditional pair of Saucony running shoes. They had a high arch to offset my over pronating feet. They were good shoes, but as I improved, lost weight, read and learned about running, I started transitioning into a mid-forefoot strike. These first shoes helped me learn to run, helped me train for my first half marathon, and helped me push a double stroller all over Honolulu, but eventually the time came to bid them adieu.

There were a few other shoes in the mix – my Vibram’s for example – which I still love for lifting and strength training, but in our wet Washington weather, they just aren’t my favorite choice outside of the summer months.

Then I discovered the Brooks’ Pure Project. Neon pink PureCadence felt like they were MADE for my feet. 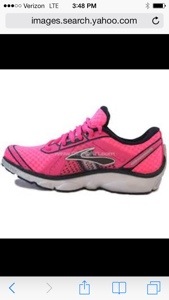 Putting these on, they were seriously like buttah. I loved them so much that when they wore out, I bought a second pair. Why I didn’t purchase 5 more I don’t know, but sadly I didn’t and they were discontinued. Brooks released the PureCadence 2, but they were awful. They hurt my feet and felt nothing like their predecessor. (The only redeeming quality was the fact that they were purple!)

Then I got some cheap Reebok RealFlex shoes which felt cushy and nice, but wore out quickly and had this kind of sole:

Cute when they’re new, pain in the butt when they have every rock, pine cone or hunk of bark lodged in them!

The last few days I’ve been sorting out my race/training plans knowing it’s way past time to get some new kicks. Trying on nearly every pair in Sports Authority, doing research online, I finally found a pair that were a close fit to those original pink PureCadence, but they were a trail shoe so they had a quarter of the support of a good road shoe.

My sweet hubby took the minions to visit the toys in Target while I flitted from store to store in a mall 2 hours away from home, all to support my running habit. (Have I mentioned I love this man!?) After 4 stores, my last hope was a Lady Foot Locker (or I’d have to order online and ship back what didn’t work.) I’m a tactile shopper so I like to roll around in my goods and feel them before I buy – unless I know the product, online shopping usually doesn’t cut it for me.

There were a couple of girls chatting when I went in, but they were friendly and one came right over to see if I needed any help. I told her what I was looking for, what size (11!) and her eyes lit up. I might have been heard praying to the shoe gods to “please have something in my size that wasn’t hideous”.

She asked me if I minded crazy colors, to which I affirmed I love. She then walked over with these Mizunos:

They have a forward roll that encourages that forefoot strike. They feel amazing, roomy toe box (imperative for keeping those toenails!) and are a fun design with great color.

My shoe fairy lady then said she had one other shoe in mind and skittered away to bring me another treasure. While waiting, I noticed the price tag on the first pair. Ouch.

The next pair she brought me were these:

Saucony’s version of a minimalist shoe with a tiny heel to toe drop! Also cute, but more importantly – uber comfy and great fit! Again I look at the price tag. Ouch again.

I look at her and she is almost giddy as she informs me that she had grabbed both pair from the sale area! I’m thinking perhaps a few bucks off, but nothing earth-shattering. Yeah, they were 80% off!

Can a person be in love with a pair of shoes? The answer in my world is a resounding YES!

What shoes are you in love with? Ever been heartbroken by a favorite that was discontinued?

2 thoughts on “The Answer is Yes!”

I'm Curly Mama! I love to write about all the things - whatever I’m into or what’s on my mind. A mother to 2 kids and 2 dogs, when I'm not writing, cooking, or working out, I enjoy being being outside! Grab a cup of coffee, have a look around, read awhile, and let me know what you think!