Skip to content
curlymamaof2 Faith and Personal Growth, Family October 2, 2012August 29, 2016 4 Minutes
I’m always amazed when I do something I thought I couldn’t do, or was impossible.
Marathons, losing weight yes, but even little things. Like when I was in high school and I had my first car (89 Dodge Colt). I had a tail light that burnt out. I thought about waiting until my dad got home from work and asking him to fix it. Then I thought – well, it’s probably just a couple of screws or something and a light bulb…I know how to operate a screwdriver. (And yes, I can screw in a lightbulb!)
So I set about doing it myself. I’m sure I messed up and took something apart that didn’t need to be disassembled, but in the end I did do it. I remember the pride and the anticipation I felt as I couldn’t WAIT to tell my dad I had done it myself!  Car things always make me a little wary. I still don’t understand exactly how all the parts of a gas engine work. I know I need to make sure I have gas and oil and my fluids filled. I can change a tire if I need to. I am not an electrician. I’m not a mechanic.
For the past couple of months, we’ve had the same CD stuck in our car stereo.  My CD player likes to eat CDs apparently. It wouldn’t eject no matter how many times I tried.  (Yes, I know – first world problem! Smh….) Anyhoo, it’s a kid music CD which was just about to drive me over the edge. I can only listen to “John Jacob Jingle-Heimer-Schmidt” about 10,000 times before sticking a fork in my eye. We were on 9,997.
So I asked my cousin (who IS in fact a car guy) to get it unstuck. By this time Hannah had been left unattended to play in the car a bit and she had jammed a second CD in there. Yeah. So my cousin got it unstuck for me and we went merrily on our way.
The very next CD we put in there (YES, It WAS John Jacob Jingle Heimer Schmidt on a different disc!) got stuck. UGH! But, since I had watched my cousin disassemble the radio (and I felt like a dork having to ask AGAIN to assist) I got out some needle nose pliers, the crescent wrench and a couple of screwdrivers and got to work on getting that dang CD out on my own.
And I did it! The CD, however, did not survive. (No, I did not have a funeral. I would have broke it on ‘accident’ if it hadn’t been destroyed during Extraction 2012.) Now, however, the stereo wouldn’t even take a CD. (Yes, I tried.)  We then drove for a couple of weeks with just the radio. I was thrilled to be rid of the kid music, but Jake and Hannah did not share my excitement. Go figure. Every time we got in the car, the idea of fixing the car myself jumped to my mind. Could I? Nah…I can survive without a CD player until Eric gets back. Or I can have my dad or cousin look at it. Did I mention that I “lost” 2 mini crescent wrenches beneath the console during Extraction 2012? Oh, yeah. My fumble fingers dropped the little bugger. So I got the next sized wrench and promptly did it again! So now not only was the CD player not working, but I had to go fishing for two tiny wrenches. Okay, time to call Eric.
So he mentioned some crazy words like “splicing” and “dash filler” and some other gobbledy-gook. I kind of tuned him out after splicing. Have I not mentioned that I am not an electrician? The little bit I remember from 8th grade technology and my dad building and wiring houses would probably not help me in this venture….
I called O’Reilly’s in Burlington (BIG shout out to them! The guy helping me WAS AWESOME and didn’t make me feel like a complete idiot!) and asked about a conversion kit or whatever it was that Eric had told me on the phone to ask for. They didn’t have what I needed, but he called the local Mobile Music (also great service) and had them set a kit aside for me. I ran over (after a pooptastrophy of course – because what adventure would be complete with out someone pooping their pants?!)
Home we go with the kit. I am getting excited thinking, Yeah, I can do this. Its just a couple of screws. I got it. Then I opened the kit and there they were….loose wires. Crap. I thought it was going to be a connector plug that would connect the car’s wires to the CD players without me having to do anything.

Off comes the dash…. 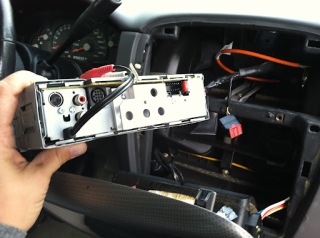 SERIOUSLY?!!??
Again I peered into Eric’s tool box and looked around to see if anything sparked my memory on how to go about this. I also looked at what was in the new stereo’s box, the instructions with the conversion kit….wrench, check. Wire cutters, yep. Oh….Eric DOES have the little connectors. And yep – this wire cutter is outfitted with a crimper….hmmmm…..
The instructions instructed me to tape off the wires that didn’t match with the other side, so I did that. (After finding Eric’s electrician’s tape). I spliced, crimped, reassembled, and reconnected!!! 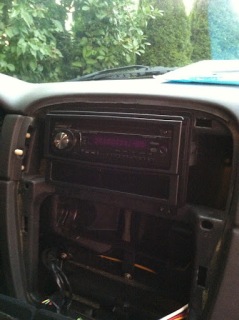 (And I haven’t been electrocuted yet!!)
While I won’t be opening up my own car stereo installation business anytime soon, I have to say – I’m pretty darn proud of my skills! And now, not only do we get to play CDs, I can also plug the auxiliary jack in to my phone and listen to my music that way without having to burn new CDs all the time! YAHOO!
And, of course while I wish Eric was home to do these kinds of tasks…I’m always proud of myself for doing what I didn’t think I could. (Insert self-back pat here.)
I am woman – hear me roar.
Or at least hear John Jacob Jingle Heimer Schmidt blasting out of my car!

I'm Curly Mama! I love to write about all the things - whatever I’m into or what’s on my mind. A mother to 2 kids and 2 dogs, when I'm not writing, cooking, or working out, I enjoy being being outside! Grab a cup of tea, have a look around, read awhile and let me know what you think!