Growing up we lived in a few different houses, but one in particular was a magnet for spiders. It was nestled in the woods of the pacific northwest on the side of a lake. One of my chores was to sweep the decks and clear out spider webs out of the railings. There were always webs and more often then not, a big (or what I considered big at the time) fat spider waiting for me to gulp down my stomach and screw up my courage to plunge him off the deck. I hated this chore. Not because I disliked the work necessarily, but rather my irrational fear and loathing of spiders.
And then they would climb up the bathtub drains and oops! As you go to brush your teeth while still a little sleepy – there is your good friend Mr. Eight legs. Yuck and a half.
I’m not quite sure why I dislike them so much. I think it may be because of the creepy-crawly nature of those 8 disgusting legs. Blegh. And really?! I know that all of God’s creatures serve a purpose in the food chain, but I could have done without spiders thank you very much. It seems their only purpose is to make me wig out like a lunatic in need of a padded room. Oh – and cock roaches. Not a fan of those vermin either.
So fast forward 30 years and we are living in Hawaii and have a little “encounter” with a cane spider. Here is what they look like if you are not familiar: 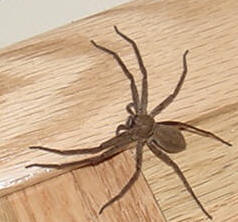 Yeah, even putting that picture up is giving me the heeby jeebies. Hlghhahghhgalablegh! (Yes, that is word!) The rental we lived in when we first arrived to Oahu was INFESTED with roaches. (climbing up drains, on garbage cans – EVERY.WHERE!) Upon several visits with our friendly Terminix representative, he surmised that the cane spider was probably attracted to our home due to the infestation of roaches. Needless to say – we didn’t stay long and I gladly paid to break the lease and move into base housing the following month.
This past Saturday evening, the kids and I returned from a mini vacation. We unloaded the car, played with toys we hadn’t seen in a week or so, I did 64 loads of laundry, got the kids fed, bathed and tucked in bed and finally sat down to watch a little television. And then I see it. Just a little movement in my peripheral vision.
Nah, I didn’t see that, did I? It was just out in front of the couch and I think I saw it crawl under it. But no, couldn’t be. I continued watching t.v., nearly willing it to not be what I thought it was.
Then the dang thing decided to make a beeline from under the couch to under the television stand. Okay. Breathe. It. Was. Huge.
Bigger than any other spider I’ve ever seen in Washington. It wasn’t a cane spider or anything, but it was the size of my palm. Big.
It’s 11pm, I’m in my jammies, feeling vulnerable. The kids are in bed, I’m barefoot and I HAVE to do battle with this thing. Hubby is deployed. (This is SO his job!) Kids are asleep and there is NO ONE to come save me from this thing. So I scramble to the kitchen (with my toes severely curled) and grab my lethal spray bottle of…..409?
Yup. I sat on the couch with my feet curled up under me with a bottle of 409 and waited. Again, screwing up my courage to do what I have to do. Cause there is no way on God’s green earth that I can go to sleep knowing that thing is crawling around down here. It has to go. (Or I could check into a hotel for the remainder of the deployment….ha! I wish! Although maid service has me considering it seriously for just a moment!)
Then I see it crawl up the wall behind the t.v. Okay – do or die. I look at the thing for a moment. I say out loud to the spider, “Dude! Do you seriously have to be that big?!” He didn’t not answer me back. I shot him with the 409 while simultaneously doing the silent scream. You know that scream that you have to get out, but really don’t want the repercussions of waking up the kids? That’s the one I did.
409 didn’t do the trick. He just stood there frozen on the wall. So I RAN into the kitchen, grabbed the wasp and hornet spray that kills on contact and shot him with it. He curled up and fell to the floor.
Breathe again. For about 5 minutes I just sat on the opposite side of the room. Finally I gathered myself to ensure his demise. I successfully sucked up the carcass in the vacuum and then he made his exit via trash bag to the garbage. He has since been picked up by my good friend Mr. Garbage Collection Technician. He is my hero!
And since I won this victory against arachnids everywhere, they seem to be launching a counter attack because I have seen at least one spider everyday since we have been back. A fat one (although normal sized for Washington) up in my sink drain, another on the ceiling in the laundry room and I found a cluster of babies in the garage. And just this morning a little 8-legged fellow graced my front door. I screamed in shock as I almost touched the thing when I walked out the door this morning – much to my kids delight. They think its hilarious when I freak out or shriek or get injured. What is up with that?! Crazy kids!
Not really sure why I felt compelled to share my arachnophobia with the world other than perhaps by sharing my heebie jeebies – I can stop thinking about it and get some sleep!
Notice to all arachnids: I am seriously not a fan and not your fan. Please stop visiting me. I don’t want you. GET OUT! Thank you!

One thought on “Spiders”